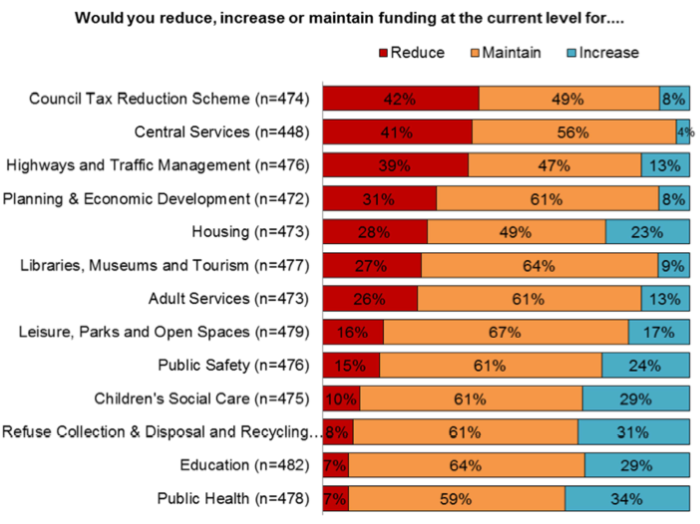 To be fair, they were only following orders from Central Government… And to be fair, some wanted to cut some communities more than others. A few even said they wouldn’t support any cuts at all. In the ends, no budget was passed at all as each of the three parties, Labour, Tory and Green, couldn’t agree which community deserved to be attacked the most.

The debate seemed farcical with speeches in defence of the city’s most vulnerable from all sides, followed by most councillors voting to attack the cities most vulnerable. But this was after a host of tinkering amendments fell as councillors sought to protect particular groups.

The Red Team defended car drivers needin to drive fast and to park cheaply, while attacking the Greens’ low recycling rates. The Blue Team praised the city’s refuse workers and attacked the Green Team for not supporting transgender communities. The Green Team claimed that Brighton is now booming and a massive tourist tower on the seafront would be a great improvement to the city.

Then the Red and Blue teams got together to stop the cuts to the Mayor’s Office, leaving one Green to wonder aloud what was so great about the Mayor’s old hat. Ironically, since the reversal of this cut would be paid for with the jobs of our members in Communications, moments after the vote, the system of recording and displaying votes at the meeting crashed and pre-electronic recording methods had to be used! The Red and Blue amendment also saved some of the threatened children’s centres with a one-off grant. It would keep them going until after the elections, then next year they could be shut without a vote.

The Spectre of Pickles is Haunting Brighton

Of course, one of the reasons for obeying government orders is the fear of Eric Pickles and his team of Commissioners arriving in the city to replace elected councillors and simply impose cuts. One councillor, booted off the Green Team, seem to welcome this prospect just before the General Election. But when he informed us that it would be Unison members’ picket lines resisting Pickles, Unison members couldn’t help wondering what was the point of electing councillors at all if it was going to be down to us to resist the cuts.

Unison will of course resist all cuts, and we will ballot for strike action the moment any of our members are threatened with compulsory redundancy. We are not prepared to get involved in a discussion about which of our members are more worthy than others or which parts of the community should pay for a crisis that was not of its making. Unfortunately, the whole “debate”, in the media and amongst all colours of politician, is framed in terms of choosing which group of residents and council staff should pay for the mess we’re in. Those who question the need for any cuts are labelled “absurd” by the main parties. Yet the council’s own random survey of residents showed a majority against all cuts. This is buried in their own report which instead focuses on giving residents a say in who should lose jobs and services.

The survey clearly shows that less than half of local residents wanted to cut anything. You can read it and look at the graphs showing this here  Even the most maligned part of any council, “central services”, seen by many as red tape and pen pushing, could only get 41% of residents to support a cut. Of course we know that if you take away office staff or IT support, frontline staff caring in communities will have less time with those they look after in order to do paperwork.

So why are Brighton’s residents so at odds with their representatives? Perhaps it is because pretty much every household or family in Brighton & Hove has members or friends who actually do this kind of work. Perhaps they also understand far better than our councillors the obscenity of playing vulnerable groups off against each other in order to make cuts.

Whatever the reason, Unison is proud of local residents who refused to make that choice in the council survey. The “absurd” view that no cuts are necessary has been the view of about a third of the population ever since the financial system hit the rails in 2009. This is despite almost total acceptance in all media discussion and among almost all politicians of all parties, Labour, Tory, Lib Dem, UKIP and Green, that there is no alternative to cuts.

The bulk of the council survey, and how it was reported in the local press, is all about how to make cuts. The fact that when asked to chose who to cut residents said no-one has been ignored. We in Brighton & Hove Unison, along with other unions, have always argued that there is plenty of money in our society to fund all the services we need.

Unions such as PCS, which represents tax collectors amongst others, have shown that the billions of pounds of uncollected tax, mainly by the rich and corporations, would be enough to reverse austerity if collected.

Brighton & Hove Unison has highlighted the £750 billion owed to banks and big business through Private Finance Initiative deals. Many of the buildings built under these deals, such as the Jubilee Library, have already received the building costs from the taxpayer. The deal with these companies, to keep on paying for decades, is supposed to be set in stone – but if a council’s obligations to care for the vulnerable can be broken, why not break PFI obligations?

Would that really be absurd?

Are we really absurd for wanting to continue to do our jobs of keeping the city running and supporting the most vulnerable in the city?

Are local residents really absurd for not wanting to make any cuts?

Or is the spectacle of our elected representatives squabbling over who to attack the least the real absurdity in the politics of our city?