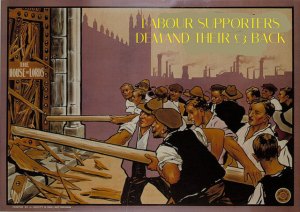 “Its against the law to ban us from voting” declared one supporter. “The Sale of Goods Act, 1979, clearly says purchases of goods must be “fit for purpose”. Labour says “Registered Supporters will also have an individual vote at future Labour Party leadership elections“. They have denied us this so we want our money back!” Said Aaron Daniels, who also told Facing Reality that he wasn’t a member of another political party, though he admitted that he hadn’t always voted Labour.

Aaron asked Facing Reality to publicise his petition demanding all disenfranchised supporters have their £3 refunded. “Labour could potentially makes tens of thousands of pounds through what is essentially a con trick. What have they done with the money?”

Facing Reality also spoke to the leadership candidates, three of whom simultaneously said “The Tories are clearly terrified about the prospect of me becoming leader and winning their voters over, and they shouldn’t be able wreck my election by signing up to vote for an racist who doesn’t even love Our Queen“. The other candidate, Jez, told Facing Reality “we would rather nobody was excluded from the vote. The actions of the leadrership will damage the Party. However, we would prefer it if nobody made a fuss, and that blogs like yours didn’t make things worse, as the publicity will damage the Party and threaten Party Unity“.

Meanwhile, in a separate development, another group of disenfranchised Labour supporters have reported the Labour Party to the Information Commissioner alleging breaches of the 1998 Data Protection Act.. Facing Reality spoke to one supporter, asking to be identified only as “Silk Worm”, who said the only reason he can think he’d be disenfranchised is because he’d told a Labour Party canvasser in May 2015 that he was going to vote tactically for Caroline Lucas because “she had the best chance of keeping the Tories out”.

Silk is now organising for a mass of Freedom of Information requests to find out why they were excluded. She expects hundreds of others to follow, each of whom could then initiate action against Labour for illegally sharing personal data. without permission. If found guilty, Labour Party staff could be liable for £500,000 fines and possibly time in prison.

In a statement to Facing Reality, three of the candidates stated “This preposterous. We would never support illegal acts. Ever.” Jez told us “the unity of the Party is my concern. And if people aren’t allowed to change their voting intentions ever, we may as well declare Mr Cameron as the winner of the 2020 General Election now“.  Meanwhile Ken Glelly from Tusk said that “Labour has been a bourgeois Party since the day I left. It’s time to Build a Fighting Socialist Alternative voice for workers and Youth in parliament.”

Facing Reality would like to make it clear that “we are not, and never have been, members of the Labour Party. We would like to be able to support the campaign more however, and if Jeremy Corbyn does become leader, we may join up to help out in what will be a crucial battle for anyone wanting to resist austerity and neo-liberalism”

4 thoughts on “Thousands of Disenfranchised Labour Supporters Demand Their £3 back!”